There’s apparently not much scientific proof that women are better multitaskers than men but in our household, Julie is definitely the one who can do more than one thing at time. In fact if you try to talk to Rudi while he’s doing almost anything else, forget it. 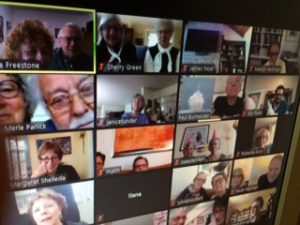 You can drift away attending a Zoom meeting but not running one!

When Julie was a reporter, she often worked on a number of stories at the same time. Sometimes, she had a chart to keep track of who she was interviewing for what publication. She was a freelancer, so not infrequently, she interviewed the same person for more than one outlet with more than one angle. There was rarely a problem. (Of course she was significantly younger then).

When Rudi was working himself through graduate school by rebuilding VW engines, the job had several distinct phases. Without turning you all into mechanics, here’s what was involved: the engine had to be removed from the car. Then it had to be freed of the metal shrouding, intake and exhaust systems. After that the cylinder heads would be removed along with cylinders and pistons. Then the oil pump was removed and then the crank case was split. Finally, the crankshaft along with camshaft and bearings were disassembled. Several of these things had to go the machine shop while others had to be cleaned and repaired. Rudi did these things one after the other. It was possible to do more than one at a time, and if he had dovetailed the individual tasks, he would have been able to earn the same money in half of the time. Alas, he could only do one thing at the time. 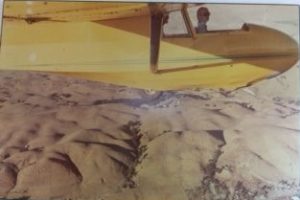 Rudi gliding over Hayward   Some years after that, when Rudi finally got his FAA Pilot’s license for gliders, he planned to combine his love for the music of Johann Sebastian Bach with the beauty of flying in silence (relative silence, that is), He bought a Sony Walkman and taped Bach’s “Air on the G-String”. This was to be his celebration of the 4th of July. He had himself towed up to 3500 feet and released the tow plane over Lake Elizabeth in Fremont. After a lazy right turn, he flew towards the west and had the late afternoon sun warm his chest and face. The plan was to put on the earphones and listen to Bach’s music while floating towards the Bay. As soon as the music started he realized that he could not hear the wooshing of the air over the wings, a critical indicator to the pilot. He could have looked at the air speed indicator but that is not the same as looking at the scenery and “hearing” the all important speed. Alas he could do only one thing at the time.

A change since the lockdown.

The thought struck Julie the other day when she was about to leave the house to walk over to a neighbor’s house for a socially distanced walk. She was planning to eat a piece of matzah on the way over. It’s a short walk. One problem: you can’t eat with a mask on. Of course, since she was walking alone from here to there, the mask wasn’t necessary, but she likes to role model good behavior so the matzah stayed behind. No more eating and walking. She took a walk a few days ago with a friend, who arrived with a peanut butter and jelly sandwich and then realized ruefully when she donned her mask that lunch would have to wait.

During the six weeks that Julie took her virtual course Election 2020, she noticed that she was having trouble listening to the lecture (it had been pre-taped) and not getting distracted by other things. She could keep the sound on, while opening other windows on the computer to read email, edit a document or even play a game. The class turned out not to be what she expected and maybe some of the problem was her less-than-full attention?

According to Dr. Nancy Napier, writing in Psychology Today, “research in neuroscience tells us that the brain doesn’t really do tasks simultaneously, as we thought (hoped) it might. In fact, we just switch tasks quickly. Each time we move from hearing music, to writing a text, or talking to someone, there is a stop/start process that goes on in the brain.” And Julie wonders how age figures into that. Was she able to multi-task those years as a reporter because she was younger?

There could be a lot said for slowing down and concentrating on one thing. Our friend Laurie wrote, in response to an earlier blog about souvenirs from the pandemic, “Will I really want to go back to being so busy all the time? I’ve found great pleasure in taking 2 or 3 hours to prepare dinner without having to worry if it will make it to the table too late because I started cooking at 2pm. I read my book for a least a little while each day, something I rarely allowed myself ‘before’. And I am spending a lot of quality time with my adult son and his wife. I know this will not persist when we are free to move around a bit more so I am savoring it now. Something to put into my personal COVID memory box.”

Julie Freestone and Rudi Raab wrote their novel Stumbling Stone over a period of almost 25 years. For most of that time, they were working other jobs and progress on the book depended on multitasking and on both of them. Then Rudi retired and turned his attention to editing and rewriting. The book was published in 2015.