Rudi reads to Julie every morning while she’s doing yoga. She’s usually already read the San Francisco Chronicle on her Kindle. He reads her the East County Times: News of the Weird, birthdays, historic dates, Dear Abby and sometimes editorials and op/ed pieces. You can get a sense for where the country is trending by noting the kinds of problems people frame in the advice columns – grandmothers complaining about their children not being protective enough and potentially exposing the older family members to COVID-19. Family members who have lost their jobs and are lazing about the house binge watching television.

You’re living it, so you can make up your own scenarios. These can be hard times for people trapped in the house with other people who get on their nerves or for people alone and anxious. It used to be that we heard stories about road rage; people flipped each other off for tailgating or changing lanes recklessly or driving too fast or too slowly. There are fewer vehicles on the road so this isn’t happening as much. But other things are. 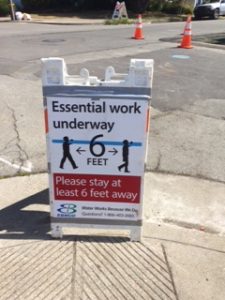 Our local utility making it clear that their workers, mostly masked, have permission to work

Besides checking the advice columns, followers of Next Door, the online community, can certainly get a feel for what their neighbors are thinking. For a while, there was a lot of compassion as people lost their jobs and favorite stores and restaurants closed. People advocated helping each other, sharing food, donating to help those struggling.

But then things turned darker. It became about why people weren’t wearing masks and keeping their social distance. Julie’s son suggested (kidding?) that you could carry a yard stick to demonstrate what six feet was – or whomp the person who got too close. People complaining about their neighbors having parties with multiple guests in violation of the health orders. People wondering why certain businesses were open when they weren’t classified as essential.

Julie and various of her walking buddies have tried out different techniques to “encourage” people to move over so they are six feet away. Hand signals (sort of like the folks on the taxiway at an airport) motioning them to keep their distance were not always met with favor. A few people snarled at them. One person yelled.

Walking around the neighborhood can sometimes feel like dancing. Step off the sidewalk to avoid an unmasked person coming straight at you right down the center of the walkway. Glaring doesn’t help much. Can you even spot a glare if the person glaring is wearing a mask?

And it isn’t just about strangers. Rudi walks alone or with Julie. Julie chooses her walking pals from among those who are scrupulous about keeping their distance, wearing a mask and agreeing to walk in places where there are no crowds.

So a few months ago, it was probably unthinkable for most of us to wish that someone or a whole group of people would have evil befall them. But things seem to have changed. Several people we know said that if they became ill with COVID-19, one thing they would consider is whether there were a way to eliminate certain supposed leaders that were destroying the country. They’d weaponize themselves.

During the times when demonstrators showed up at state capitols, unmasked, some toting guns, to demand that they be “liberated “(DJT’s term) from shelter-in-place orders, Julie said sort of apologetically to someone that she didn’t really wish bad things would happen to them, but that maybe it would serve them right if they got sick. The friend said, “I used to be a nice person. I’m not anymore. I do wish they’d get really sick.”

Our blog editor Karen admits that she hopes DJT will have “bad” side effects from the medication he’s taking that is not approved for COVID prevention. “I wish he would disappear off the face of the earth. He and Pence.”

We have a number of friends who have married or have been together for a very long time. A few of them have shared the snarky times they’ve had since the lockdown, when their partner is getting on their nerves. Well, being together 24/7 or close to it probably isn’t conducive to flourishing relationships. There have been reports of increased domestic abuse.

Some of us have relatives who have lost their jobs or are worried about what lies ahead. An article in Human Resource Executive reports that a recent survey found 88% of workers reported experiencing moderate to extreme stress over the past 4 to 6 weeks. Nearly seven in 10 employees indicated in the survey that the COVID-19 pandemic is the most stressful time of their entire professional career, which has aligned with stark increases in new prescriptions of antidepressant. 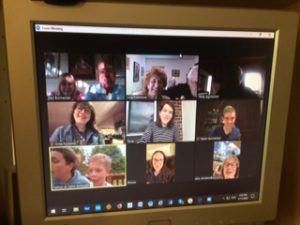 That may line up with the increased use of Zoom by office workers and others to connect with the work teams, families, friends and affinity groups. And even there people are getting short-tempered about what time the calls are set up, whether to mute everyone as a default, how much light each person has so they can be seen properly and who knows what else. It’s a funny world out there. Hurumph

Maybe it’s OK if we’re a little testy and feisty. If we weren’t, might it mean that we were accepting this weird world as our new norm? Is that good thing?

Rudi Raab and Julie Freestone drove 10, 811 miles to and from Nova Scotia in 2011. They probably had more than a few spats on their trip but they did arrive home almost two months later still laughing. But of course, that trip was their choice.