Yesterday’s blog described why Julie felt we needed to explore the question of how some of you are using religion, faith or spirituality to cope with the pandemic. Today we’ll introduce you to three friends who described their history with religion and how it helps now.

Our neighbor and long-time fellow activist Sara says she was raised as a Jew but gave up on organized religion when she was eight years old and met a Holocaust survivor with the tattoo on her forearm, “If we were the chosen people, why were 6 million of us chosen for death?  I wasn’t looking for God up in the sky with a halo around His head, just some kind of explanation for all these inconsistencies.”

Sara was married to a non-Jew for 52 years. “Although I’m mostly non-observant, I consider myself to be culturally and historically Jewish. I identify as a Jewish agnostic. There’s something out there beyond rational explanation but I don’t know what it is:  God?  The Great Pumpkin? I believe in Tikkun Olam (repairing the world); I believe in making the world that I leave a better place than when I entered it. I consider myself to be a spiritual person, for which you do not need organized religion.”

She was drawn to Temple Beth Hillel, the Richmond synagogue, because of its emphasis on community. Though initially skeptical, she says “I needed to add to my communities of interest, and I felt that I could belong to this particular community. I went to High Holiday services for the first time in decades last year.  The fasting was the easy part, but listening and participating gave me a lot to think about, especially as I’m getting older.  I’m spending what’s left of my time doing the best I be kind to others, lots of random acts of kindness and being helpful too, given the constraints under which we live.”

Regarding the current situation, Sara says, “What I’ve taken from all this is that while I’m physically alone, I’m not spiritually alone, and that’s what really matters. I continue to emphasize the spiritual aspects of my life and to connect with others. Not everybody has access or desire to communicate by virtual methods. We need to talk to people in addition to e-mail and social media.  When we’re isolated, we need to hear the voices of those who care.”

Julie’s friend Paula, who lives on the East Coast, says she was a Catholic with very strong faith until her best friend, Carol, died even after Paula prayed. “I truly felt that praying to God for Carol’s survival was going to work. It was the first time in my life that I became so angry and stopped going to Mass. I felt like he slapped me on my face. I struggled for years as I pulled further and further away from my religion and continued to feel the loss of my best friend. 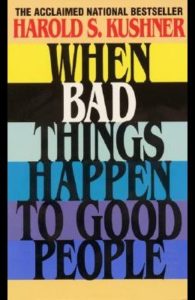 A book helped Paula find her way back to faith

Then Paula discovered a book: “When Bad Things Happen to Good People” by Harold Kushner from which she took the message “that God is here to give me STRENGTH to get through the difficult times – not to change anything. The only thing I have to do is to ask. I can tell you so many times where God has given me the strength to get through very difficult losses or struggles.  I didn’t realize how easy it was to ask.

Paula still attends a non-denominational church.  “I must repeat that my beliefs are based on asking for strength through Christ which I always receive,” she says.

Our neighbor Sally says she’s always been a religious person. She attended Catholic school where she learned about saints. “People ask kids what they want to be when they grow up. I secretly wanted to be a saint.” She says she wore holy medals and tried to practice penance. Then she grew up and didn’t go to church anymore. “Then one day, I went to confession and felt good about it. I started returning to mass every Sunday.and slowly came back to my faith.”

“As a Catholic I realize that we are not all alone. Everyone has a guardian angel and the Holy Spirit to guide them. We  have the free will to make our own choices for either good or evil. The rosary is very important because it’s the most perfect, beautiful prayer to Her (Mother Mary). Many (incidents) convinced me that my prayers are being heard and even answered.  So now, I’m praying the rosary every day and sometimes 4 x a day. (We are living in scary times, I think) I’m going to pray until I’m blue or until the Potus is.”

Sally is an essential worker and quips that when she drives to and from work these days and says the rosary while driving, it’s hard to yell out bad drivers. 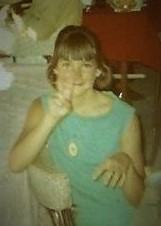 Even as a child, Sally was proud of her medals

Two dreams Sally had recently made her feel that God is angry and that the corona virus is “a punishment put on us all.” In spite of that, she’s optimistic. “I do think God is merciful, I think He is forgiving. I think He is just. I think He wants us to obey His commandments and He is angry because we haven’t.”

So at the conclusion of these two blogs about what helps get us through, we say that whatever your faith, it may come down to us all caring about and seeing after each other and seeking whatever help works for you. And perhaps that will help us all come out whole at the end.

Julie Freestone and Rudi Raab celebrate Chanukah every year. Rudi makes latkes and they read the book they wrote: The Story of Chanukah for Very Small Children, written for Scotty and LIzzy Peck.