For all that you can say about the negatives of our shelter-in-place experiences, our fear of the future and feelings of loneliness and isolation, there could be some good things coming from the pandemic. Some of it has to do with new skills and knowledge we are gaining, even if we didn’t necessarily sign up for some of it. 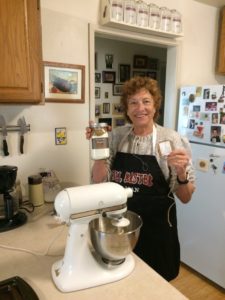 Julie has been afraid of the Kitchen Aid

Sometimes it seems like our world has shrunk in a number of ways, including an outsized focus on food: what to cook, how to get it, where to store it, how long it will last. Along the way, we’ve learned some things. For one thing, Julie never was much of a baker. We’ve described some of that in previous blogs. In the last 60 days or so, she’s more or less learned to use a Kitchen Aid. And here’s a word about that magic piece of equipment. Rudi always wished he had one. When our friend Carol died unexpectedly a few years ago and we were helping her relatives from Canada deal with her estate, they offered us anything in her home that we might want. We took some pots that were much higher quality than the ones we had and Rudi decided to take Carol’s Kitchen Aid. It is a 1950’s model made entirely of cast iron and therefore weighs a ton. Whenever there’s been an opportunity to use it, he has. Julie had never touched it.

But then cookie-making happened. And mostly it happened because having something sweet to nibble is a nice treat and cookies turned out to be a great item for barter. Trade them for wine, for beans, for a trip someone is willing to make to the grocery store. The chocolate cornmeal cookies were the vehicle for the Kitchen Aid lesson. A number of dry ingredients need to be added and mixed and butter needs to be creamed. Julie still won’t use the Kitchen Aid unassisted but it’s a skill that’s building.

On a similar note is egg cracking, something Rudi never thought he was able to do. Shells fell into the bowl, yolks broke in his hand, separating eggs eluded his grasp. But there’s been a lot of cooking of all sorts in the past weeks and since we are almost always with each other 24/7, Rudi has been able to watch the process and now he’s mostly over his aversion to the task. 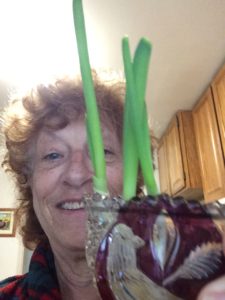 You can actually make things grow from vegetable discards!

And then there is some miraculous “gardening” our friend Deb turned us on to. Seems you can salvage things like the stem end of the romaine lettuce, put it in water and new baby leaves will grow. We loved this idea and have tried it with lettuce, green onions and regular onions. Deb sent a photo of her lettuce success. Our green onions are growing. The lettuce seems to be rotting. Back to the drawing board.

We haven’t been making particularly elaborate stuff, but when we Skyped with our Ohio kids recently, they told us about a family baking challenge they organized with friends. Each family was tasked with creating the graphic novel character. They showed us their finished product. It was impressive.

Before we knew how long this was all going to last, it seemed we could just make do by skipping regular meetings like book groups and others. But then it became obvious that unless we wanted to lose all momentum, we’d have to embrace video conferencing like Zoom. Some of us did it faster than others out of necessity. Julie wanted to have a Seder and it was the only way. Some did it more expertly than others, learning how to share the screen with documents and help people participate better by muting and unmuting themselves. And some people had to be dragged kicking and screaming into the new approach. But most of us came in one way or another and maybe we’ll never quite be the same.

Rudi’s son, an architect, is using new technology that has a 360 degree camera that assists in seeing much more of a room or location than was possible before. There’s probably a lot more of that out there.

And Ashby Village, the organization that Julie works with to help older adults stay in their homes and thrive, has a volunteer technology team that’s helping members learn how to use computers and feel comfortable with them. They know it’s a way to stay connected to their family and friends and take part in virtual activities they were involved with before the lockdown.

Apparently one industry that’s booming is stationary bikes as people who belonged to gyms realize that they could buy the equipment and stay in shape at home. Some of us have been joining our yoga classes virtually. Walking now requires seeking out trails and paths and neighborhoods where there seems to be better social distancing and fewer people. Our son and daughter-in-law Janette have found new places to explore and Janette has been doing yoga in her backyard and even did a headstand outdoors for the first time. Our friend Laurie, a long-time pilates teacher not only learned to use Zoom for her instruction but says that having to do virtually classes has sharpened some of her skills.

And Janette says she’s developed a new routine for efficient at-home work: set a timer for an hour, don’t get up until it rings, take a short break and start again. Our friend Kim, who is working from home in Wisconsin, says she is probably much more productive than she has been in the past in an office. She thinks people spend a lot more time socializing and not focusing on work in the “normal” world. Kim also described her new relationship with her laptop. “It’s like having a baby.” She’s tethered to it from dawn till dusk and when she’s not actually holding it, she feels like she’s abandoned the infant

Then there are some skills that you can’t actually see or describe but we think we’ve picked some of them up. We are definitely more adaptable. If we pick up our e-cart order at the supermarket and they haven’t given us something we asked for or they’ve substituted something else, we’re cheerful about it. If we have a recipe that calls for a seasoning it turns out we don’t have (what did happen to the turmeric?), we google a substitute. Julie might be a little more patient and less results-driven than she was. Rudi has definitely stepped up his team member skills. He was always willing to help and now he’s eager as well. And we hope we are more compassionate about people who are struggling to cope with the shelter-in-place.

What have you to report about new skills and knowledge?

Rudi Raab and Julie Freestone gained a good deal of new skills and knowledge when they wrote their novel Stumbling Stone over a period of 25 years. One somewhat amazing one was discovering their different approaches to writing and revising and learning to adapt to each other in a constructive way. That skill has helped with writing these blogs.