The media has been full of stories in the last week about opening up the country and the state and individual counties. Businesses that are doing it prematurely, governors who are beginning to ease restrictions, individuals who are defiantly beginning to resume their daily lives. Unfortunately it turns out that these decisions, like many other things related to the pandemic in this country, are not being driven by facts. Or maybe not really driven at all.

Logic could be used

Not that it couldn’t have been/can’t be. It turns out the Centers for Disease Control and Prevention (CDC) crafted a detailed document to guide states on the reopening of retail, daycares, schools, and religious services, among other things, but that report was quickly shelved by the White House, the Associated Press reported.

The 17-page document, “Guidance for Implementing the Opening Up of America Again Framework,” was supposed to be published on May 1, the day the 45-day federal social distancing campaign expired across the country. A CDC scientist who spoke to reporters on the condition of anonymity said the agency was told by White House officials the report would never see the light of day. The document asks users to use “decision trees,” or a series of questions about the condition of reopening that loosely follow the three-phase guidelines for business reopening endorsed by the White House last month. For every camp, school, place of worship, or day care center, reopening cannot be considered until the community is not requiring significant mitigation to reduce the spread of COVID-19.

There doesn’t seem to be a similar document for us lowly individuals. However, our New York friend Debbie Berg sent us a link to this very interesting article that describes how the virus spreads, most dangerous places to be and what’s ahead. It’s written by Erin S. Bromage, Ph.D., who is an Associate Professor of Biology at the University of Massachusetts Dartmouth.

Which way is the virus going?

A few more things to consider. Last week, California recorded its highest number of corona virus cases yet; of course this also reflects more widespread testing. Yesterday, there were 711 new deaths in the U.S. There is no vaccine, drugs for treating COVID-19 are still in the experimental stage and there aren’t enough “trackers” in every county to follow-up on exposure once someone tests positive. And all this talk about opening the country is happening even as an increasing number of Trump administration staff, many of whom don’t wear masks, are either testing positive, self-isolating or reporting contact with COVID positive people.

So what are we ready to do? And will we be guided by fact? Boredom? Desperation?

Two friends of ours announced they were going to have their housecleaners start coming again. This isn’t a restriction that’s been eased yet in our area. We don’t like cleaning the house. Julie has said in the past that she’d give up the daily newspaper before she gave up house cleaners. Ours are a husband and wife team. He has a full time job and has been an essential worker during the shelter-in-place. They have two kids in college. We’ve been paying them during the shutdown but we’re not quite ready to have them come back. We might not like sweeping and mopping the floor, vacuuming and cleaning the bathrooms, but it isn’t the worst thing in the world and we’ve got plenty of time. (We do draw the line at dusting) 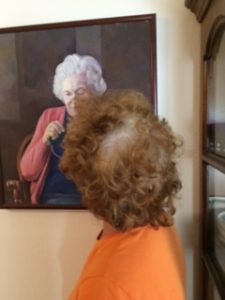 Rudi compares Julie’s hair to cousin Miriam: not there yet

Our neighbor who was adamant about not leaving her house to shop has now started to go to senior hour at Trader Joe’s and has joined us three times for socially distanced cocktail hour. But other friends invited us to drive to their home and share their spacious back yard for dinner or drinks. The restrictions on travel haven’t eased yet and we’re not ready for this either.

Then there’s grocery shopping. Yes, it’s a pain to put in an order, wait in the parking lot and hope that you got what you asked for. But we’ve gotten used to it; the wait time has dropped so dramatically that you actually do same day orders; and we’ve started a farm-to-table produce delivery service which comes every other week. So we’re not quite ready to go tromping through a store yet, especially as long as our family, friends and neighbors still seem willing to add some of our items to their lists or barter for various things.

Ten years ago, in the year before Julie retired, she would stop nearly every morning at the Starbucks in Martinez, California, near her office for a latte. After she retired, that treat required driving and so lattes became a relatively rare event. Usually it was included in her monthly breakfasts with son Michael. She hasn’t had a latte (or that monthly breakfast) since before the shutdown, even through Starbucks is open for drive through business. Usually the length of the lineup of cars is approaching those that queue up for food give-aways and COVID testing. Not worth it. And she’s not ready to go inside one of our local cafes. (Julie’s mother’s day gift this year was a latte!) 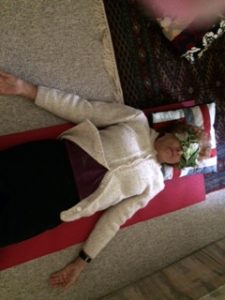 Julie brought her yoga eye pillow into the house

In some places, there’s been talk of gyms and clubs opening and maybe yoga studios won’t be far behind. Julie has been taking two virtual yoga classes a week. It was a struggle at first and there were pillows flung all about in our computer room. But order has come and a routine. There’s something soothing about doing yoga in your own space, being able to leave early or wander off briefly if necessary. The idea of having other people breathing near you, or wearing a mask during the session isn’t too appealing. The sign of Julie not being ready to resume her normal in-person classes is that she just retrieved her eye pillow from the yoga bag in the car to use at the end of the virtual class for relaxing. Not ready yet.

We also assume that as we resume some sort of “normal” life, we’ll end our daily blogs. But miraculously, even after more than 50 days of confinement and 50 blogs, we still seem to have something to say and many of our readers are still sending us compelling and encouraging comments. So we’re not ready quite yet to end.

So what are we ready to ease up on? And we have to confess we cheated. We did have the neighbor across the street, who had a lawn mower that worked, mow our front and back lawn. We paid him. No face to face contact. And our garden conversion project will begin this week. The workers will wear masks. They are on the list of businesses that can open.

For weeks, Rudi’s been nursing a tooth ache. He’s talked to the dentist, whose office is closed. He considered going to see him until the dentist told him his wife was being tested for the virus. Rudi took antibiotics and it seemed to be easing up. But when he realized he could hardly even chew spaghetti, we decided it was time. So he has an appointment Monday. And it’s hard to wear a mask when you mouth is opened and being poked and prodded. So literally, that much opening up we are willing to concede.

Julie has been choosing her walking partners based on whether they respect the six foot distance and wear masks. Rudi walks, as he always has, either by himself or with Julie. We have been choosing where to walk based on whether bikers, walkers, joggers and others are obeying the restrictions, which have not been eased. Julie had been meeting all her walking companions, arriving in separate cars. She’s made one exception: friend Sue has an arm in a cast and can’t drive. So recently, they’ve gone in Julie’s car, Sue sitting in the back and both masked and with windows open.

We could take heart in the fact that around the world, with more than 4 million cases reported, there have been almost 1.4 million recoveries. Otherwise, we’re not there yet.

Julie Freestone and Rudi Raab wrote the novel Stumbling Stone over a period of 25 years. A number of times they went away for weeks at a time to focus on the book. Once they worked without electricity at their cabin in the woods. No people, no telephone. Maybe it was good practice for the shelter-in-place?