By Julie Freestone, Rudi Raab and Some of You

When Julie worked on tobacco prevention issues for the county health department, one issue they tried to address was the use of cigarettes by teenagers. In those days, most smokers began using tobacco by age 19. As the prevalence rate of smoking in general and among youth declined, it was important to show young people that “everybody” wasn’t doing it so they didn’t feel weird about not lighting up.

All of that contributed to creating new social norms around the use of tobacco products. The tobacco industry spent millions of dollars to promote smoking everywhere and by everyone. It was a difficult fight, but eventually the norms changed. Some researchers said one thing that contributed was the discussions held on the local level about tobacco regulations.

New norms for the pandemic 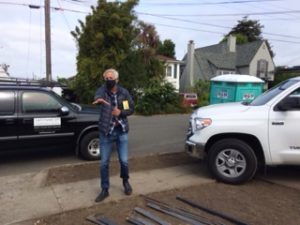 We bring this up because the current pandemic is creating the need for new norms about social distancing and masking and maybe other issues. We think we have a way to go before everyone gets the message. We get emails from some of you complaining about people not complying. We got this interesting one from a blog reader who said his relatives returned from Mexico recently. “They had to spend the night in the airport in Mexico City and they said it was amazing. Every employee, staff, and worker had on a mask, face shield, and gloves. Distancing was carefully marked and monitored. They arrived in Los Angeles to find no or very few protocols being observed. They were frightened, picked up their car delivered by a brother and fled to Oregon.”

From Nevada, our friend Kristen reports that on a recent trip to the grocery store, she and a clerk were the only ones wearing masks. And a friend of hers wants a live baby shower, no one masked. “People are gathering everywhere. There’s a lack of commitment to the crisis,” she said.

On the other hand, our relatives in Germany said their son’s school was using hula hoops to help the children mark off safe distances from each other now that classes have resumed for some.

We’ve talked about this before and we got a comment from another reader who objected to us reporting failures to obey the rules and not reporting what he perceives is much more widespread compliance. “Without having access to good data nor taking the time to analyze it, I cannot say how prevalent are the clueless or thoughtless within our local areas. But I do believe that you usually find what you expect to find. More importantly, by implying that most people are ignoring pro-social rules (as you do by failing to recognize all those—a majority, as far as I can tell from my travels in the East Bay) you undermine the establishment of norms. That is serious. That is counter to what I know you want,” he said.

Something worth considering although we note that as a former reporter (Julie) and a police officer (Rudi) we thought we were writing objectively about what we had observed in our small amount of travel around the neighborhood and from the blog readers who write us. Not a scientific sample, of course.

You might recall that we ended our initial blog about baseball by saying that as San Francisco Giants fans, we were sure there were Dodger supporters amongst you who had stories (but we didn’t want to hear them). Of course that was mostly a joke and we did get a few any way. Here’s a really unique one from someone who’s using the shelter-in-place to get important documents in order:

We “probably married because we knew all the Dodger players’ numbers and scores and could talk baseball forever…Now about urgent papers, we’re working on them because that’s what to do. On one of the entries one of us wrote—in jest but oh so true— to scatter our ashes from Ebbetts Field to Abbots Lagoon Pt. Reyes.”

And speaking of Ebbetts Field, we got this from our friend Michelle who writes emails like haikus: “only real dodgers/ the brooklyn dodgers/before and after Brooklyn/that’s how we tell time/but i do have a soft spot in my heart/for people who came after the flood/these men were my first crushes/they came to my temple each year/up close and personal they told their /stories/giants among men/i bow down”.

We got a number of responses to a recent blog that included a list of items on our near-term “bucket list”. Julie mentioned sushi and popcorn and Rudi said he’d like to have dinner at a restaurant with a full bar. Those items elicited criticism from one person for being “low-keyed and unambiguous.”

Our across-the-street neighbor contributed a poetic vision of what he wanted: “What’s on my list? Face to face encounters of any kind. I do enjoy a little wine on my wisteria overgrown veranda, but it seems to taste better when it is shared…not with the doves, crows, mockingbirds, seagulls, moths, butterflies, honey bees, bumble bees, hummingbirds and the beautiful views of my overgrown garden, but with some flesh and blood.” Maybe we’ll add a journey to his yard to hear the birds to our short bucket list. 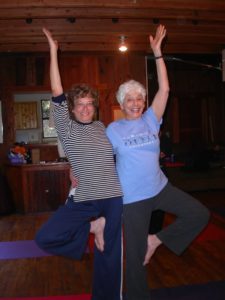 Nina, a silver fox herself, suggests Julie let her hair grow out

Our friend Nina gave encouraging words about Julie’s gray/white hair starting to emerge “It looks like someone has been unable to visit her hairdresser. I like the faint touches of grey in your tresses, dear friend, and I vote you experiment with a new look now that s.i.p. (shelter-in-place) is providing you and so many others the perfect opportunity to ease into the “distinguished look.” You can save time, a bundle of bucks, and banish harsh chemicals from your scalp. Anyhow, with your lovely eyes, your sparse wrinkles, and the application of a smidgen of blush and lipstick, you are on your way to silverfoxiness.”

Nina also talked about how she’s handling the shelter-in-place: “Introvert that I really am, I’m kinda enjoying our current barebones existence.  Savoring the smallest quotidian pursuits with no inner critic perched on my shoulder; exercising with Mary online; reading again; preparing for a Zoom singalong tonight with my beloved chorus; watching the visiting birdies outside for unconscionably long spells; dispatching a handful of long-deferred domestic maintenance; wallowing in being a slob — who cares whether this matches this or is too spotted to wear?  In short, I’ve been getting in touch with my inner slug and finding it an agreeable companion.”

And may we add again here that for some people, especially those living alone, this time of solitude can be difficult and painful.

Julie Freestone and Rudi Raab wrote Stumbling Stone, a novel based on their true life stories. Rudi translated it into German. Throughout the journey and during this pandemic, they’ve had wonderful support, suggestions and inspiration from their friends and family. They thank you all.