When Julie said we should write a blog about religion, faith and spirituality in these times of COVID-19, we were probably both equally surprised. None of those things, however one defines them, is helping us cope with the strange world we are in right now. But Julie was steadfast; she believes that among our blog readers, many of you have something besides kind neighbors, grocery delivery and such that is helping you stay strong and not despair. 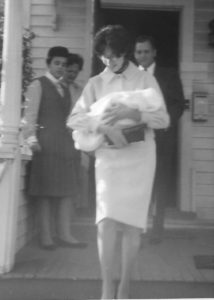 Julie and her first husband had their son baptized

Julie says she would have described herself as an atheist, but when she moved to California and worked with a Native American woman who believed that spiritual guidance was part of our lives, she decided she didn’t really know and was an agnostic. She confesses that there have been times in her life when she would have liked to have appealed to God for help but acknowledged that since she was a non-believer, that didn’t make sense. She practices yoga and has for more than 10 years but it’s about the stretching and the routine for her, not the meditation or spirituality.

Rudi was raised in northern Germany, which is the Protestant half of the country. There is no separation of state and church in Germany and religious instruction is a firm part of the curriculum of every school. The state withholds taxes for the church and ministers live on a salary that is derived from taxes.

Rudi was required to attend church every Sunday for at least two years. The high point was his 16th birthday. That is the age at which you are allowed to no longer attend religion classes at school and you don’t have to attend church anymore.

Rudi loves music, especially old music.The Lutheran church hymns were exclusively from the Rennaisance. And then came the music of the Bach family. Nothing is better. So now Rudi only goes to church to hear old music. Here in the US he has to pay for a ticket. When he is in Germany he mostly hear the music for free. He is not religious but lives by the 10 commandments

Every year for the past two decades, we’ve had a Passover Seder. We’ve shaped the Hagadah, the “book” that guides us through the ritual, to suit us. It is as non-religious as it can be, considering the context. We talk about Passover as a holiday to celebrate independence and the freedom from tyranny and to acknowledge that even until today, until everyone is free, we must keep telling the story of Passover.

Why talk about it now?

So given all this, we would possibly seem like the most unlikely pair to address the question of how faith, religion and spirituality figure into the pandemic response. And yet it seems that we could not keep talking about food, grooming, supplies for health workers and the like— 50 or more blogs so far— without at least making an effort to explore this topic,

In order to give it a fair shot, we reached out to a number of people we knew made religion or spirituality a cornerstone of their lives. The responses we got were quite stunning and probably will require more than one blog to share.

Our friend and neighbor Sue was introduced to Buddhism in 1984. She started daily practice about six years ago.  Here are her thoughts:   “Before the Covid-19 pandemic, it was widely acknowledged that the Internet contributed to social isolation. In our current experience of social distancing, that same Internet is a lifeline of connection via zoom for all of us; including those of us on a spiritual path. There are now dozens of free live stream teachings, online practice sessions and retreats offered by spiritual teachers worldwide.”

“As students of the Dharma, (Buddha’s teachings), we look to our own individual meditation practices as well as to the sangha, the spiritual community, for support in our practice. This support helps us to experience, allow and accept whatever is arising moment to moment. During the current crisis we seek to stay grounded in the values and teachings that we cultivate by meditating. By staying connected to these sources of compassion, wisdom, patience, and courage, moments of fear, anxiety and panic can be known without falling into despair.”

Sue says the concept of impermanence is another helpful guide in the current struggle to cope with isolation, loneliness, and boredom. “The idea that whatever arises, passes away is crucial to both a moment to moment reckoning with painful emotions as well as long term hope for a positive outcome.”

Sue ends by sharing observations from a spiritual friend who observed that with fewer distractions at home and in a much quieter environment in general, you see your mind more clearly; you notice your aversion to sounds, for example. During one of her meditations, a crashingly loud garbage truck turned onto her street. She reported instant aversion and groaned to herself as to its interruption of her peaceful state. Interestingly she noticed the aversion begin to morph into gratitude to the garbage collectors who daily risk infection to clear our trash.”

“Perhaps,” says Sue, “if all of us the world over took a moment to meditate or reflect on a world of compassion and gratitude to one another, we might emerge from this pandemic healed and transformed.”

And finally, Julie’s yoga teacher Debbie offered this analogy: In the Kath Upanishad is an analogy that endures throughout much of yoga’s later history:  The self is compared to a rider in a chariot and the act of yoga is that of controlling the mind as a charioteer controls the reins…”

So the next time you lie awake obsessing about the pandemic, try to image you are driving a chariot.

Next: How are people who grew up with a strong faith in organized religion coping today?

Julie Freestone and Rudi Raab, authors of the novel Stumbling Stone, took a course – Passover in a Day – to learn how to conduct a Seder. They’ve had one ever year since. This 19th one was a virtual Seder. Maybe they all will be?