Last night I was watching PBS NewsHour’s story about a detention camp in San Diego, California, where the government is sending children crossing the border illegally, some alone, some with parents. U.S. Senator Jeff Merkley (D-Ore) tried to visit a similar facility in McAllen, Texas, unannounced. Eventually he was allowed entry. The media was granted access several days later to the San Diego site with strict rules. The PBS reporter Jean Guerro pointed out that no phones, cameras or recording devices were allowed and reporters were barred from talking with the children. Pre-recorded footage made by the facility was given to the media. 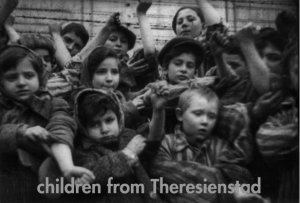 The word “Theresienstadt” popped into my mind. Here is what the World Holocaust Remembrance Center in Israel says about that location:.

In 1941 the Nazis established a ghetto in Theresienstadt (Terezin), a garrison town in Northwestern Czechoslovakia, where they interned the Jews of Bohemia and Moravia, elderly Jews and persons of “special merit” in the Reich, and several thousand Jews from the Netherlands and Denmark. Although in practice the ghetto, run by the SS, served as a transit camp for Jews en route to extermination camps, it was also presented as a “model Jewish settlement” for propaganda purposes.

When reports about the death camps began to emerge at the end of 1943, the Nazis decided to present Theresienstadt to an investigative commission of the International Red Cross. In preparation for the commission’s visit more deportations to Auschwitz were carried out in order to reduce the overcrowding in the ghetto.

Fake stores, a coffee house, bank, school, kindergartens and the like were opened and flower gardens were planted throughout the ghetto. The commission arrived in the ghetto on June 23, 1944. Their meetings with prisoners were meticulously planned beforehand. After the visit the Nazis produced a propaganda film about the new life of the Jews under the auspices of the Third Reich. After finishing filming, most of the actors in the film, including almost all of the independent leadership and most of the children in the ghetto, were sent to the gas chambers of Auschwitz-Birkenau. 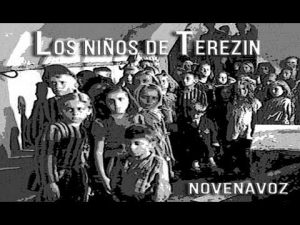 The children of Terezin

The appalling overcrowding, sanitary conditions and malnourishment led to the spread of diseases amongst the population of the ghetto. In 1942, 15,891 people died in Theresienstadt, half of the ghetto’s population. More than 155,000 Jews passed through Theresienstadt until it was liberated on May 8, 1945; 35,440 perished in the ghetto and 88,000 were deported to be murdered.

I was going to include in this blog a photoI in which a child was locked in a cage in Texas. I could not verify that the photo was authentic. This is what the Washington Post said about Senator Merkley’s claim that he saw hundreds of children in cages:

While we can’t corroborate Merkley’s claim that he saw “hundreds” of children in these chain-link fence enclosures, it seems clear from the photographs we found that Customs and Border Protection does hold children in fenced enclosures at the McAllen facility. Trump administration representatives did not deny this.

If you really want to go back in time, check out U.S. Attorney General Jeff Sessions justifying this treatment by quoting the Bible. It turns out that same section – Romans 13 – was used to defend slaveholders in the 1850s.

Julie Freestone and Rudi Raab wrote Stumbling Stone, a novel based on their true life stories. It gives voice to a forgotten victim of the Nazis. The book is available as Der Stolperstein in German.