The French say thank you to four American veterans

In the last few years since we published our novel Stumbling Stone/Der Stolperstein, we’ve thought a lot about survivors of World War II, victims of the Nazis, those who didn’t survive those who resisted.

Our book has an excerpt from Rudi’s mother – a German woman who fled Dresden and survived the Allied bombing.

I hadn’t given much thought lately to what it must have been like for people in France and England, who saw their freedom slipping away, besieged by bombs, growing more hopeless in the face of dwindling resources. I’ve read about how Franklin Roosevelt and the Americans turned a deaf ear to the increasingly more frantic pleas from Winston Churchill and others for help.

What I never realized until this week was what a legacy of gratitude the American intervention in World War II engendered among the countries that became our Allies in World War II. 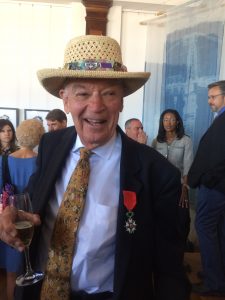 Nathan Shoehalter, recipient of the French Legion of Honor medal

This week, we were invited to an extraordinary event at the residence of the French Consul General in San Francisco. The occasion was the knighting of four American service men, all in their nineties.  Get your brain around that.  Knighting has never been a real concept for me.  Something that would be conferred on someone I knew. Our friend Nathan Shoehalter, a medic in the war, received the French Legion of Honor at a home perched high above San Francisco.

After the playing of the Marseilles- the French National anthem- and the American national anthem, ‎Emmanuel Lebrun-Damiens, the Consul General, welcomed the nearly 50 friends and family of the veterans. “We will never forget your act of bravery.  This is our way to show our eternal gratitude,” he said. 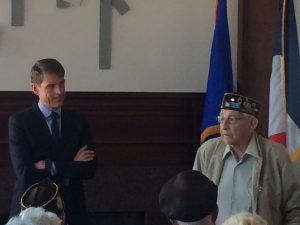 There was no doubt about Lebrun-Damiens’ sincerity. Each sentence he uttered reflected his belief that it was because of the services of veterans like Nat and the other three present that day and those who “made the ultimate sacrifice,” that France is a free country today.

Freedom is a gift

“Freedom is a gift that does not come for free. It requires courage and bravery. We French know exactly what we owe these four. They were young men who left their homes to fight in countries they had never seen to save people they didn’t know.”

Who were these four? Our friend Nathan was a student at Rutgers University when he enlisted in the Army in November 1942 at age 19. He served seven months as a combat medic in France, the Low Countries and Germany— including three months in nonstop combat duty. He provided first aid and comfort to literally hundreds and hundreds of wounded and dying soldiers. He was awarded the Purple Heart in February 1945. At the French ceremony this week, he said, “I had no weapon, I shot nothing. I am indebted to France.”

Vito Mastranangelo was also 19 years old when he joined the Army. He landed on Omaha Beach in Normandy, France, was promoted to sergeant and set up cemeteries and graveside sites through Europe. First Lieutenant Ryan O’Brien was 21 when he joined the Air Force in February 1943. His first mission was August 15, 1944, the invasion of Southern France. He flew 34 more missions. His crew was saved from being shot down by sabotaged shells manufactured in Oskar Schindler’s ammunitions factory.  PFC Peter Schantz was 18 years old when he was drafted. He landed on Utah Beach on August 2, 1944 in Normandy.  He and his Battalion maintained the security of the Port in Antwerp, Belgium until after the Battle of the Bulge and the end of the war.

When honest men and women stand up 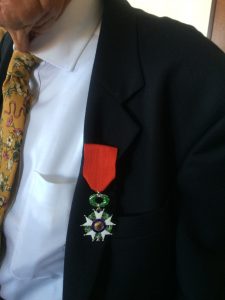 Here it is: the French Legion of Honor medal

The award they received—the French Legion of Honor Medal —was created by Napoleon in 1802. It’s the highest French recognition. “You are an example of the greatest generation,” Lebrun-Damiens said. “You faced the Great Depression and went on to fight for liberty and freedom. You are a model of what happens when honest men and women stand up with values and courage. You saved France and Europe. “

Lebrun-Damiens grew up in Normandy and he said that every high school in France requires students take a trip to the Normandy cemetery to insure that no one ever forgets those darks days.

Julie Freestone and Rudi Raab wrote Stumbling Stone, a novel based on their true life stories. It was written in part of give voice to a forgotten victim of the Nazis, Rudi’s Uncle Gerhard Raab.