You might remember that when we first arrived in Germany for our book tour with our novel Der Stolperstein (Stumbling Stone), people were anxious to treat us to meals. Which was lovely.  Except that most of those generous people – Germans – thought the best cuisine to offer us was Italian.  Without being rude, we tried to suggest that for two Americans touring their country with a newly published German novel, we might want GERMAN food. 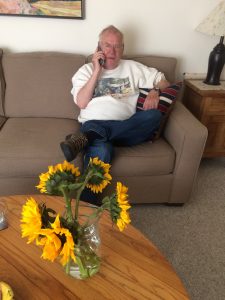 Rudi has taken over answering the phone. Thanks Roberta for these lovely flowers!

We had had fantasies of Schnitzel, Fleisch Salat, Wurst, potatoes of various kinds. Rudi had weeks of lovely anticipation dreaming of crusty German rolls, with cold cuts and German marmalade of the sort that isn’t available in the U.S. (Wild forest berries)

So when we came flying back to the U.S. unexpectedly so I could have emergency eye surgery, many friends stepped forward to offer help. Which has been terrific.  Some people offered to bring dinner.  And to my surprise, Rudi began chanting ,”lasagna.”

First of all, when I met Rudi almost three decades ago, I knew how to make lasagna. It wasn’t probably the most authentically Italian, but it tasted pretty good and I had been making it for twenty years. He wasn’t a big fan and so it dropped out of our repertoire. To the best of my knowledge, I don’t think he’s ever ordered it in several of the local Italian restaurants we like.  Spaghetti and meatballs, yes.  Lasagna?  Never.

And then I was also surprised that he wanted lasagna since we’d been laughing about how much Italian foods the Germans tried to feed us.

And finally, a year or so before we went to Germany, Rudi’s doctor told him he was pre-diabetic and needed to change his diet and lose weight. He did a remarkable job, dropping almost twenty pounds and cutting out his beloved potatoes, pasta, bread, sugar and virtually all other carbs. He started walking a mile every day without fail.

Then we went on the book tour and carbs came stampeding back into his life. Potatoes of every sort. Rolls, butter.  It was obvious he’d have to return to his new style of eating post haste.

One thing friends have consistently brought us since we got home and Rudi had to take over the kitchen and other chores. Bread.  We are not regular bread eaters but who can resist fresh pain au levain, rustic sour dough bread and challah? I want to remember this the next time I want to help a sick friend. I’ve never thought of bread.

Another thing I hope I remember for helping in the future: be specific. One friend, about to leave on a trip, said she had frozen split pea and barley soup.  Would we like some?  Of course!  Other friends, who know my secret fantasies, suggested bringing sushi for lunch.

Anyway, whenever anyone suggested bringing us a meal, Rudi would whisper “lasagna”. Turns out it’s a touchy thing to decide whether to accept offers or to make specific requests. I asked one friend for brownies.  (She loves to bake and her brownies are sublime). The one person I did ask for lasagna said she’d never cooked it in her life and suggested several local places that sold delicious authentic Italian dishes.

Did I mention that Rudi actually likes to cook? He’s decided to make lasagna himself.  And when a number of people offered to do grocery shopping, he confessed that he was looking forward to outings to the store.  It gives him a break from his nursemaid role.

It is so decadent that we have friends who offer all kinds of help. We feel so grateful. Thank you!

Rudi Raab is taking a break from his German translation and book tour activities to tend to his co-author, Julie Freestone. They will have more tales of their book tour soon.