What did Mathilda know?

After I posted the blog about my mother’s (Mathilda Gruber Conan) notes to me as she was dying in a hospital in New York, my cousin Peter Burmeister (Burelli Farm in Vermont) wrote me this recollection.

“Your Facebook post about your mother brought back memories. I remember her well, when she visited us in Wallkill with your father and you…. I also remember some gifts from Germany that she sent us, including a whole gingerbread house, and some other novelties. 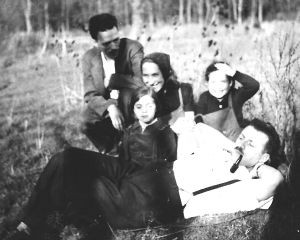 But mostly, after reading what you wrote, I remember a conversation I had with (family friend) Bernard Fried about her. Bernard was a great admirer of your mother, perhaps he was more than a little in love with her. Anyway, he told me that when she was diagnosed with leukemia and was told that by her German doctor, everyone close to her denied the disease she had. At that time people apparently believed that it was better for the patient not to know. Bernard was furious that the doctor had told her the truth.

Instead, her friends and family told her that all the doctors in Germany were incompetent, that all the good physicians had emigrated either before the war, or those that were left, immediately after peace was declared. They told her that the diagnosis was wrong and that she would be fine.

Bernard then said that near the end, she probably figured out that she was dying, but no one was willing to tell her the truth.

I thought I’d share that bit with you, troubling and bizarre as it may be.”