“Here There was a Fight”

June 1 is the anniversary of the publication of Stumbling Stone, our historical fiction book based on our true life stories and the experiences of one German who resisted the Nazis. 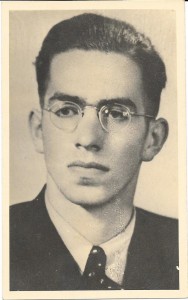 Stumbling Stone is dedicated to Gerhard Raab, a young German who resisted the Nazis.

It’s been a year of adventure, discovery and tremendously satisfying feedback from a wide variety of people. At our book events and when we’ve visited with book groups, we’ve been asked why we titled the novel Stumbling Stone.

We explain a unique project, started by German artist Gunter Demnig, to remember the victims of the Nazis. More than 32,000 Stolpersteine (stumbling stones) have been placed in Germany as well as in Austria, Hungary, the Netherlands, Belgium, the Czech Republic, Norway and Ukraine.

Our novel is intended as a literary memorial to one German who despised the Nazis and refused to go along with their hate-filled actions. In the year since the book was published, we have been thanked for telling that story, for sharing our prejudices and our journey to reconciliation.

Other Ways to Remember

We have also learned about other memorials and commemorations, including most recently a touching short video about one family installing a Stolperstein in Nuremburg, Germany. Watch My Grandparents: Hugo and Clemy

We’re been given a number of recommendations for books and movies that are related to Stumbling Stone. The Avengers , by Rich Cohen, is about an extraordinary group of Lithuanian Jews who fought back against the Nazis, sabotaging trains and interfering in astonishing ways to save as many Jews as they could.

Lessons can be learned from this compelling book and here are a few quotes worth thinking about. Early on, as the group formed and discussed and argued about how to act, one of them says,

“Every people has its stories of heroism. It is these stories that give you the strength to go on. But these stories cannot remain only in the past, a part of our ancient history. They must be a part of our real life as well. What will the coming generations learn from us? How good will they be if their entire history is one of slaughter and extermination? Our history must not contain only tragedy. We cannot allow that. It must also have heroic struggles, self-defense, war, even death with honor.”

And much later, toward the end of the book, the author concludes,

“After a war in which the Jews were starved and degraded, in which millions of them were killed in factories, this ragged group….fought on. Their mere existence was their victory. More than anything, they left the legend of their struggle, a way to look back at history and say, “Here was a fight.”

We hope that Stumbling Stone has helped people understand that not every German was a Nazi and in some way, bring peace to a long-forgotten young man.