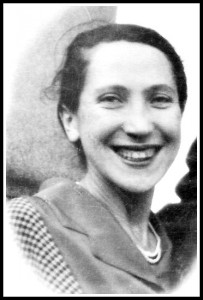 Even though our book Stumbling Stone is fiction, it is based on our true life stories supplemented with research we did to learn more about Germany during World War II.  We visited the archives at the Buchenwald Concentration Camp in Weimar, the US Holocaust Museum in Washington, D.C., the Berlin Documents of the National Archives in Arlington, VA, and other locations where we might find information. We also used family documents like Rudi’s father’s diary, letters his grandfather wrote and more.

In our book, reporter Sarah Stern’s mother is still alive and Sarah and her mother talk about post-war Germany. Those dialogues are based letters Mathilda Gruber Conan – Julie’s mother- wrote from Germany in the years 1948-51. Mathilda Conan died in New York City in 1953 when Julie was eight years old.

Things I Never Knew About You

I have your letters

the ones you wrote from Germany, after the war

when I was four.

They tell me so much more of you-

You danced all night and drank champagne

I think you flirted with other men

and fancied yourself a Bohemian.

You are gone and so long silent

and now there’s no one left to ask.

The letters stand alone for me

and become my memory.

This week we had lunch with author Mani Feniger whose find of a photo of her mother that trigger a search to know more about her mother’s history, starting in Leipzig, Germany before World War II. Her book, the Woman in the Photograph, tells a poignant story of what she learned.