The More Things Change, the More They Stay the Same

Julie’s mother, Mathilda Gruber Conan, wrote many letters from Germany from 1948-1951, where Mathilda, Julie, her father Abraham Conan, and her sister Laura lived while Abe Conan worked on the resettlement of the concentration camp survivors and other displaced persons.

One theme in her letters, besides requests to her sister Clara in the Bronx to send all manner of clothing and household goods which were unavailable in occupied Germany, was the uncertainly about whether the United States Congress would approve legislation to continue helping thousands of uprooted Jews and other victims of the Nazis find permanent homelands. 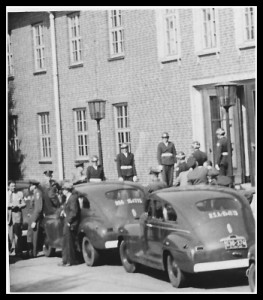 “I suppose you’ve been following the papers and the radio about the extension of the d.p. [displaced persons] bill. Nothing doing. I guess we’ll just have to watch until January when Congress meets again.It looks pretty hopeless in light of what happened during the [hearings], but the picture may change before the next session of Congress. I’m very sorry it turned out this way because putting off the bill is a victory for the McCarrans of the world. If the bill isn’t extended, I pity the remaining d.p.s that will have to live out their lives in the camps.”

(These were overcrowded camps set up by the Allies to provide food and shelter for people trying to emigrate.)

I was curious about who (Senator Pat) McCarran was. My research found this about the Nevada Congressman who served 1933-54. 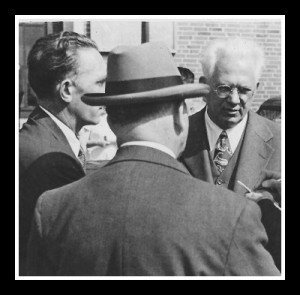 In June 1952, McCarran worked for the passage of the McCarran–Walter Act, imposing more rigid restrictions on entry quotas to the United States. It also stiffened the existing law relating to the admission, exclusion and deportation of “dangerous” aliens as defined by the McCarran Internal Security Act.

Here is what McCarran said about his new law and protecting America:

“I believe that this nation is the last hope of Western civilization and if this oasis of the world shall be overrun, perverted, contaminated or destroyed, then the last flickering light of humanity will be extinguished. I take no issue with those who would praise the contributions which have been made to our society by people of many races, of varied creeds and colors. America is indeed a joining together of many streams which go to form a mighty river which we call the American way. However, we have in the United States today hard-core, indigestible blocs which have not become integrated into the American way of life, but which, on the contrary are its deadly enemies. Today, as never before, untold millions are storming our gates for admission and those gates are cracking under the strain. The solution of the problems of Europe and Asia will not come through a transplanting of those problems en masse to the United States.… I do not intend to become prophetic, but if the enemies of this legislation succeed in riddling it to pieces, or in amending it beyond recognition, they will have contributed more to promote this nation’s downfall than any other group since we achieved our independence as a nation.”

The bill was vetoed by President Harry Truman, who said,  “We do not need to be protected against immigrants from these countries–on the contrary we want to stretch out a helping hand, to save those who have managed to flee into Western Europe, to succor those who are brave enough to escape from barbarism, to welcome and restore them against the day when their countries will, as we hope, be free again.”

His veto was overwhelmingly overridden by Congress.  The immigration provisions of the act were superseded by the 1965 Immigration Act.

If Mathilda Conan were alive today and listening to the current political rhetoric, she might comment that that more things change, the more they stay the same.