Letters and Postcards from Rudi’s Grandfather

During my recent visit to Germany, my sister gave me the last installment of my father’s papers, which were promised to me upon his death almost 21 years ago. 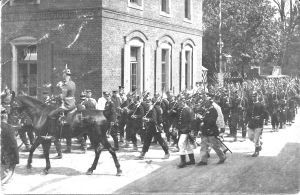 Hermann Raab (x in foreground) at the end of a 30 km march in June 1908, Camp Koenigsbrueck, Saxony. Without rest, they immediately began shooting at a rifle range.

The papers fall into two categories: photographs of my grandfather Hermann Raab from around 1907, most in military uniform. He was a staff sergeant in the 2nd Grenadier-Regiment 101, King of Prussia. There are also a series of postcards from a cousin of my grandfather’s who had emigrated to the United States shortly before the turn of the century.

My grandfather was apparently very proud of his military background and also proud of his Emperor and the King of Saxony – there are photos of them in a horse-drawn carriage traveling to visit his unit. 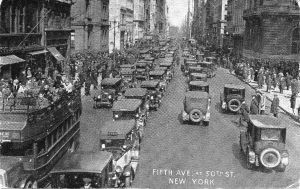 Postcards from America
The postcards from Georg Jaeckel I remember my grandfather showing me when I was 11 years old. That was the same time that I saw the postcard from my Uncle Gerhard, written from the Buchenwald concentration camp.

In one, he asked what the Saxons are saying about the Lindberg kidnapping and says that most Americans are happy it was a foreigner. He also asks for commemorative stamps of Hindenburg, who had just died. Addressing each postcard “Dear Mr. Raab,” he ends every one with “Auf Wiedersehen, I shall see you again.” He never returned to Germany.