An Excerpt from Stumbling Stone

A few posts ago, we asked you whether stories from post-war Germany about survivors of the Nazi atrocities still needed to be told. An extraordinary number of people read the post- four times as many as the other posts – and a number of you replied with very emphatic opinions – keep the history alive. This excerpt from Stumbling Stone, based on a letter from Julie’s mother Matilda, tells a very sad story about one young survivor. 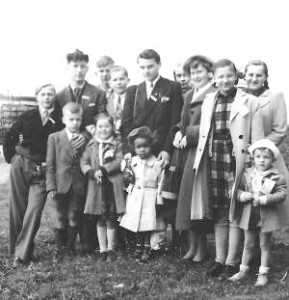 “We had just come back from the Bremen airport where we saw a plane off—hardship cases, orphans, infants, pregnant women and old people,” she recalled. “It was certainly pathetic when people that age had to start out for a new life in a new country. One of the “orphans,” a boy of 17, was very handsome and charming. An American family who was stationed there had become interested in him and offered to adopt him. His parents agreed and signed away their son. They had come to the airport to see him off. They said he was the youngest and they had nothing to offer him. They couldn’t read or write and you couldn’t immigrate if you were illiterate.”

And keep in mind that the war ended in 1945. These children had lived in displaced persons’ (DP) camps for five years!